The Calgary ticketing startup Showpass was set to launch a new product in March that would let event producers offer tickets across numerous platforms to reach more buyers. Then the entire live-event industry imploded.

Like every performer and event company that saw its income plummet as the world went into pandemic lockdowns, Showpass needed a Plan B. So the company asked its several dozen employees to brainstorm as hard as they could for ideas to pivot the company. Among their ideas were ticketed digital broadcasts, one-on-one hangouts with celebrities and a service to make donations to performers.

A few of them worked fairly well, but within a couple months, Showpass staff came up with a bigger idea: Why not put on shows anyway – and organize them where the crowd can’t spread COVID-19?

So Showpass and booking agency Livestar Entertainment Canada created the Staycation Hotel Concert Series in Calgary – where audience members are kept at a safe distance from each other on hotel balconies, with musicians, comedians and other entertainers performing below.

The move is gaining momentum: Showpass says many shows have sold out, some far in advance. The company is now working on similar projects in Nashville, San Francisco and Cairo, and partnered with another domestic tech company, travel-planning app Krugo, for a music festival this month in Regina.

“We can’t sit back and watch one of the most important industries in the world – for peoples’ happiness – just dissipate because of the pandemic,” said Lucas McCarthy, Showpass’s founder and chief executive officer, in an interview.

The shift has also helped protect Showpass from pandemic plight, Mr. McCarthy says. The company has avoided layoffs, is actively hiring and – if its positive trajectory continues – could have a profitable September. That’s not an easy feat for a startup in a pandemic. 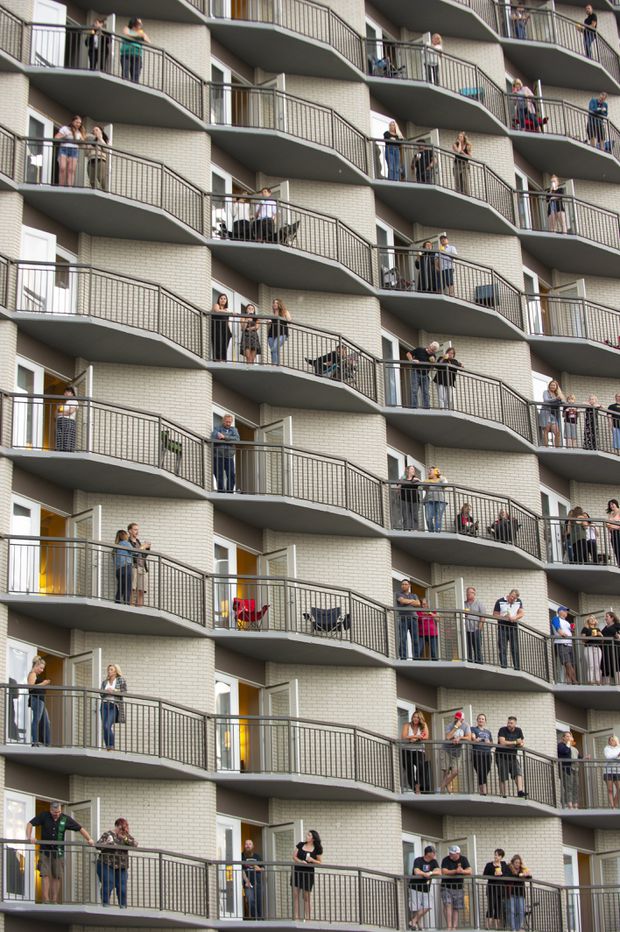 Fans take to their balconies for a socially distanced rooftop concert by The Sheepdogs in Regina on Aug. 14.

Billed as the first-ever hotel-balcony concert series, Staycation has played host to a music festival featuring country artists Jojo Mason and Kristin Carter, and cover bands such as the Hip Experience and Pink 4reud. In September, it’s organizing a drag show for Calgary Pride hosted by local drag queen Karla Marx – again billed as the first of its kind using hotel balconies.

The Regina music festival, KrugoFest, came together after staff at Krugo came up with a similar hotel concert concept to Showpass and reached out to partner with the company to handle ticketing. “It’s a cool coming-together of two Canadian tech companies,” Kirk Morrison, Krugo’s CEO said.

The classic-rock-inspired Saskatoon band the Sheepdogs performed two nights at a Regina hotel for the festival. Touring is where the vast majority of musicians make their money in the streaming-service era – so life has changed significantly for the band, said Ryan Gullen, its bassist.

“The last summer where I didn’t have at least a couple shows a month was probably 15 years ago,” Mr. Gullen told The Globe and Mail. “We’ve really missed it.”

Mr. McCarthy founded Showpass, which is incorporated as Up in Code Inc., in 2014. Although much of the oxygen in the ticketing industry is taken up by giants such as Ticketmaster and Stubhub, Showpass found several niches, including easy-to-use interfaces for small box offices and selling tickets through Facebook integration, meeting potential buyers where they’re already spending time.

The product Showpass planned to announce in March expanded on that kind of low-friction sales process. That didn’t work out according to plan. Not all of its pivot ideas have worked out well, either. Its “Showpass Sessions” celebrity hangouts, which included boxing and cooking lessons with musicians, “wasn’t a home run,” Mr. McCarthy says.

But the hotel-balcony idea has breathed life into the company when it needed it the most – and is giving a boost, however small, to participating musicians who’ve seen their incomes wiped out. The Sheepdogs perform during the first of two rooftop shows on Aug. 14, 2020.

Although performing for an audience of hotel guests is not an option for many artists – it would be too costly for do-it-yourself musicians used to playing small clubs and too small for superstars – it’s a creative gesture that, for the moment, is helping who it can.

The pandemic is “definitely a strange roller coaster” for Mr. Gullen, but he says the distanced hotel concerts will be hard to forget: “It’s going to be cool to look back and be like, ‘Remember that time we weren’t allowed to have shows, so we played on the roof of a hotel to a wall of people drinking beers on balconies?”

After 25 years in the music industry, the pandemic left Livestar Entertainment Canada’s president Rob Cyrynowski “wallowing in disbelief.” He was used to filling Calgary summers with concerts, including during the Stampede. But then he got on the phone with Joel Jelinski, Showpass’s music business development executive, and they shared the idea for a hotel balcony series. He wound up steering its musical side and launching a dedicated promotion arm called Hotels Live.

“I wasn’t going to wait around until 2021 or 2022 for music to come back,” he said. He’d tried a drive-in concert, but felt too distant from the stage and had his view blocked by trucks. The balcony series, he says, gives clear sight lines to the stage and the comforts of a VIP box. “You have freedom again,” Mr. Cyrynowski says. “It’s magical, and we’re really proud of it.”

Article originally published on the Globe and Mail: https://www.theglobeandmail.com/business/article-calgary-ticketing-startup-showpass-scrambles-for-a-plan-b/

Edmonton 58-year-old University of Alberta business graduate with an estimated net worth of US$480 m...