Over 200 people braved the bitter cold on Thursday to celebrate the official launch of Thin Air Labs. Hosted at The Grand in downtown Calgary, the event showcased some of the innovative projects happening in the city.

“It’s a perfect time to change the narrative from looking back and being negative in the province.”

Thin Air Labs is a “venture studio,” which operates somewhat differently from a traditional venture firm. Instead of focusing on returns on investment in a portfolio, the Thin Air Labs model applies both capital and design thinking to build companies from the ground-up.

“Thin Air Labs is a direct line-of-sight to the work that we’ve been doing for the last three and a half years,” said Jim Gibson, co-founder and partner at Thin Air Labs.

Gibson is a published author, entrepreneur, and prominent figure in the Calgary community. He was one of the founding members of the Rainforest Alberta movement back in 2016. The initiative sought to improve Alberta’s innovation ecosystem by fostering collisions through their “Lunch Without Lunch” meetups. Through these initiatives, Gibson and his colleagues (including managing partner James Lochrie, co-founder of Wave) concluded that ecosystems were critical, but they couldn’t be built one company at a time. They had to dream bigger.

By applying design thinking, Thin Air Labs helps companies think about their future in the context of the entire ecosystem. To start, Thin Air Labs has its sights set on the health and gaming industries.

Thin Air Games is partnered with New World Interactive, the studio behind the highly acclaimed Insurgency: Sandstorm. Originally based in Denver, New World opened its Calgary offices in 2019. Through this partnership, the two firms aim to build 10 to 20 new gaming companies per year. 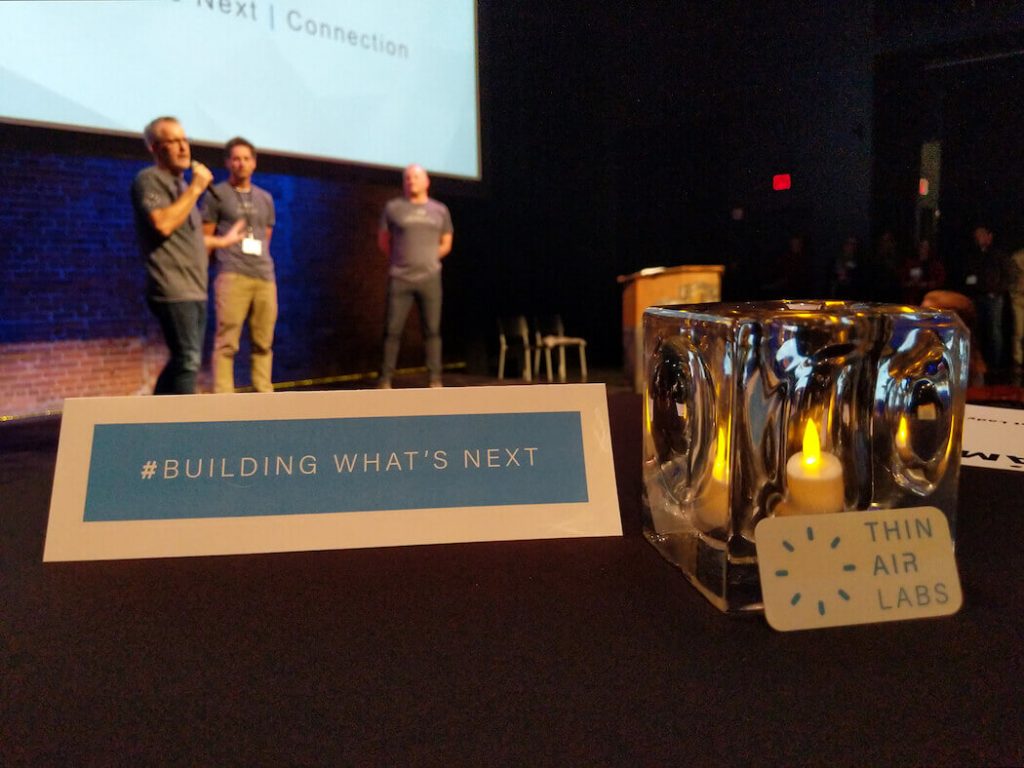 But beyond health and gaming, Thin Air Labs also has another 11 ongoing projects. These cover areas from education, to space, to transportation.

“Imagine building a high-speed vacuum train between Calgary and Edmonton,” said Greg Hart, co-founder and partner at Thin Air Labs. “Crazy idea… that could actually happen. And we want to see stuff like that happen. We don’t want people rolling their eyes and saying it’s science fiction.”

A key to building an ecosystem is to get buy-in from the entire community. The goal of the launch event was to showcase examples of what Calgary’s new economy can look like to the community.

Even the capital being raised can come from the community, such as private wealth and family offices, according to Thin Air Labs. Though these sources are not traditionally associated with tech, Thin Air Labs believes it can raise up to $1 billion to invest in companies through these channels.

“We feel it’s a perfect time to change the narrative from looking back and being negative in the province, to being very positive about what’s possible here in Alberta,” said Gibson. “We want to be an amplifier for all the good stuff.”

This article was originally posted on BetaKit: https://betakit.com/calgary-healthtech-and-gaming-featured-at-thin-air-labs-launch-party/

Nanalysis was the only non-Japanese company to win an award

But industry vet says the future is here and now

A glimmer of hope has appeared for Calgary’s beleaguered downtown office market with the leasing of...