Tech firm Jobber hits it big by thinking little – as in plumbers, painters and electricians

Special to The Globe and Mail

Software firm Jobber is getting big by focusing on small business.

Company founders Sam Pillar and Forrest Zeisler spotted the digital divide early on in terms of software available to small business versus mid-sized to large enterprises.

When the pair started out in Edmonton nine years ago, most subscription-based business software was designed for broad general markets or targeted specifically at bigger, mid-market firms.

There was nothing targeted directly at the needs of small firms with fewer than 50 employees.

“I really developed an appreciation, even an admiration, for the attitude and tenacity that’s required to do something like that – to start a small business,” Mr. Pillar says.

Jobber built a custom Web and mobile solution for those companies, many of which were operating on pen and paper or using generic office software.

“You’ve got to quote customers on the job, find out when they need the service or repair done, schedule your team to go out and do the work,” says Shawn Cadeau, Jobber’s chief revenue officer.

“You need to communicate with the customer: When are you going to show up? Once you show up, you need to invoice them, you need to get paid and you need customer feedback.”

Jobber offers a range of monthly and annual subscription prices for its technical solutions to all of those tasks, ranging from $69 a month up to $259 a month, plus a light plan for companies that are just getting started or single-user businesses. 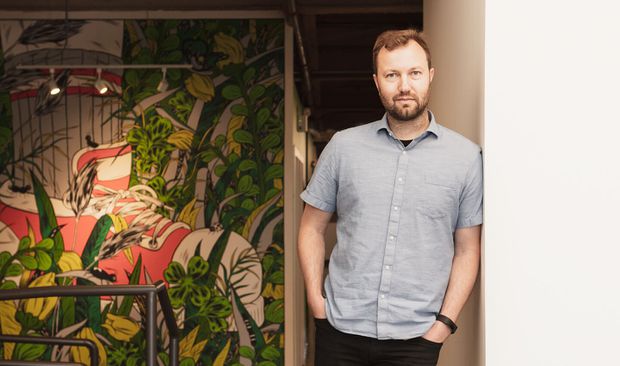 An investor-entrepreneur looked at Jobber's initial business plan 'and told us that we weren’t thinking big enough and that we needed to be more ambitious and more aggressive,' Mr. Pillar says.

The focus may have stayed on small business but a pivotal moment for Jobber was learning to think big, Mr. Pillar says.

The startup met with local Edmonton investor-entrepreneur Dave Hardy, an owner of some large gym franchises at the time and now one of the partners in fitness firm Orangetheory.

“He saw the opportunity. He looked at our business plan and our ambitions to raise $50,000 and told us that we weren’t thinking big enough and that we needed to be more ambitious and more aggressive,” Mr. Pillar says.

“We went back to the drawing board and thought about what this could really be. We were working for free, and thought if we could have a couple hundred customers we’d be making $500,000 and could pay for our server. We were thinking in terms of a lifestyle business not an industry-transforming business.”

Jobber attracted the attention of two major investors, Version One Ventures and Point Nine Capital. They now have OMERS Ventures as an investor as well.

The company currently has about 140 employees and is adding staff daily. It added a hub in Toronto in 2017, which also covers all areas of the business, from sales and business operations to product management and development.

Mr. Pillar says his private company doesn’t share revenue figures but, to give an idea of scale, Jobber client businesses deliver about $4-billion worth of services to their customers annually.

The company has tens of thousands of users, he says, with the bulk of the business in the United States and Canada. It started with one Edmonton firm, Painters Enterprise, which still uses Jobber’s software. As soon as the Web page launched, Mr. Pillar says he was getting calls from Florida and California. The company now has clients in about 35 countries.

Jobber continues to keep in touch with small business by holding quarterly panels in Edmonton and Toronto with people in the service-company business.

“We bring them into the office and just talk to them about why they do what they do, what gets them up in the morning and what they’re worried about. We’re trying to understand who we’re building this stuff for. It really helps the company understand why it’s important,” Mr. Pillar says.

Jobber may have a global reach, but the decision to keep its headquarters in Edmonton as it grew was also a big strategic decision.

Mr. Pillar and Mr. Zeisler both took computer-related programs at the University of Alberta before Mr. Pillar transferred into a business program. They followed similar trajectories after university, finally meeting in the most typical of software-entrepreneur environments: city coffee shops. Mr. Pillar and co-founder Forrest Zeisler, above, added a Jobber office in Toronto in 2017. The firm currently has about 140 employees.

After incorporation in 2010, Jobber grew, progressing through various sizes and locations.

There have been two jumps in employee growth. In 2015, the firm announced it had secured $8-million in Series A financing led by OMERS Ventures along with participation from its two big original investors.

“We raised Series A when we were about 28 people. When you’re 28 people, adding six or seven feels like a really significant amount of growth.”

The company headquarters is located on Jasper Avenue in downtown Edmonton, filling four floors of the red brick historic Jasper Block building. The offices are much what you would expect of any software firm: open concept, recreational opportunities like foosball, a drum kit in the conference room, a full kitchen, and locally painted murals to jazz up the exposed brick and open ceiling interiors.

Mr. Pillar says staying in Edmonton allowed the company to hire and retain the technical talent it needed. While there is plenty of talent in more conventional locations for software firms, such as Silicon Valley, there is also a lot of competition for that talent, he says.

“Edmonton is a really interesting market. You’ve got lots of talent. U of A, NAIT [Northern Alberta Institute of Technology,] MacEwan [University] are spitting out talent. There are a few companies, but you don’t have in Edmonton a rich pedigree of software companies,” Mr. Pillar says.

“We have a significant advantage in Edmonton because we can recruit really great talent over a longer time horizon. It’s important for us to continue to grow our talent base and Toronto complements the efforts in Edmonton.”

The firm eventually found it needed to expand to Toronto to continue to recruit more experienced technology talent. That King Street West office is expected to grow at a faster rate than the Edmonton office in the next year.

Chris Lumb, CEO of technology accelerator TEC Edmonton, a joint venture of the University of Alberta and Economic Development Edmonton, says Jobber has been able to outpace some other tech firms in Edmonton because of its business plan.

“It’s really easy to get swayed by trying to address a massive diverse market and one of the things Jobber did was stay really focused on their charter customers. I think that’s been a key to their success – working with service professionals that need support for doing their administration easily while they’re in the field.”

Mr. Lumb says he thinks Jobber will continue to be able to attract the talent it needs even as the tech and artificial intelligence sector in Edmonton heats up.

“They have traction. They have a reputation. People like joining a company that’s going places,” he says.